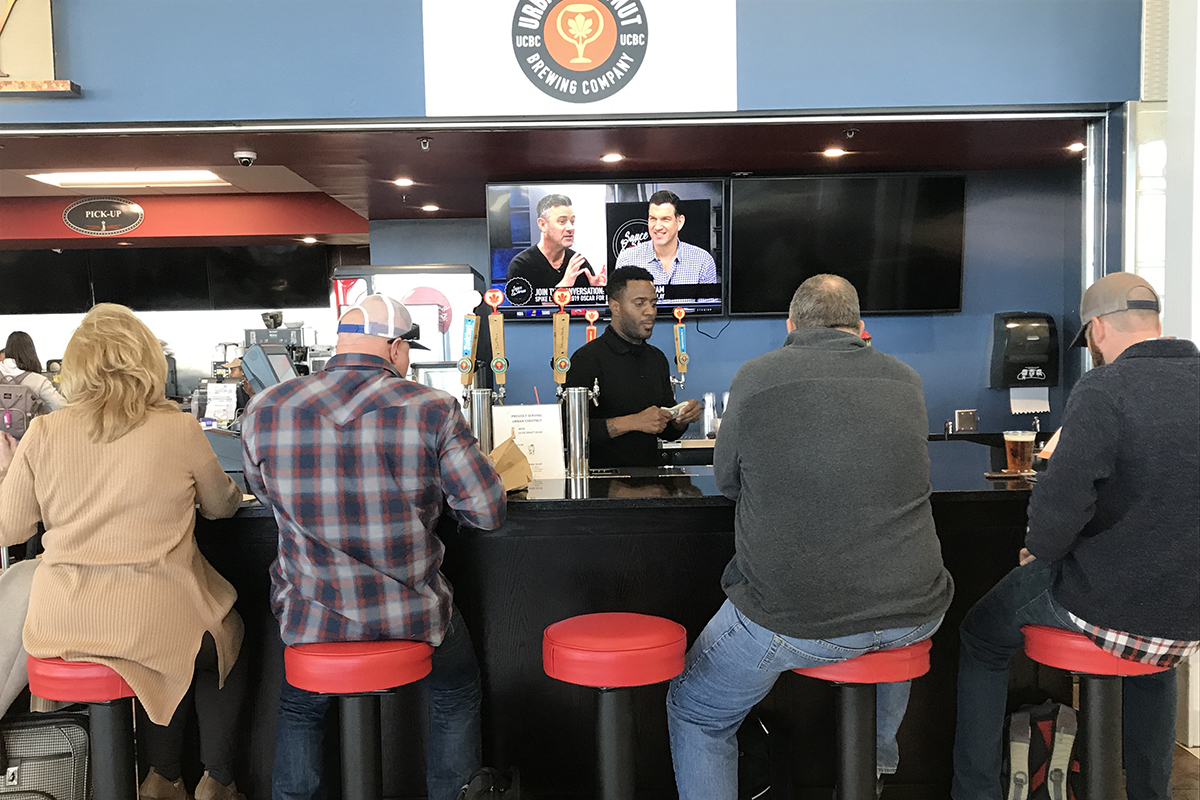 In a move that will have local craft beer fans clinking mugs with excitement, St. Louis Lambert International Airport announces the debut of the Urban Chestnut Flight Bar in Terminal 2. The Urban Chestnut Flight Bar is located adjacent to the Great American Bagel, near gate E8, and is operated by OHM Concession Group.“OHM Concession Group is proud to partner with Urban Chestnut Brewing Company at the St. Louis International Airport,” said Milan Patel of OHM Concession Group. “As a company founded and headquartered in St Louis, we are committed to working with local concepts to showcase our city’s rich culture and heritage. This partnership with Urban Chestnut will allow passengers the opportunity to experience a uniquely St. Louis company.”“We’re extremely thrilled to partner with OHM on this opportunity. The St. Louis International Airport is a lot of people’s first or last impression of the city,” said Chris Gorman, UCBC’s St. Louis Market Manager. “The UCBC Flight Bar in Terminal 2 will give us an opportunity to be front and center where tons of different people from St. Louis and elsewhere can see us and try our beers. It’s great exposure for us.”Urban Chestnut is proud of its unique brewing philosophy knows as Beer Divergency- a “new world meets old word” brewing approach creating modern American beers that also pays reverence to the heritage of European beer styles.  Urban Chestnut will initially feature eight beers on tap:  Zwickel, Schnickelfritz, Forest Park Pilsner, Fantasyland, STLIPA, Dorfbier, Kinsale, and Bushelhead Cider.“St. Louis is internationally knowns as a beer town and Urban Chestnut is part of the new chapter of beer makers that are drawing in new fans both locally, and from afar,” said Airport Director Rhonda Hamm-Niebruegge. “Passengers and visitors can sample more than 40 different craft brews and other St. Louis favorites at STL’s bars and restaurants, which has greatly expanded from years ago.”The Urban Chestnut Flight Bar is open from 4 a.m. to 9 p.m. daily. Passengers can enjoy drinks at the bar, or order them to go and enjoy at their gate or elsewhere on the concourse before their flights.

The U.R.B.
Pizza and Beer

Urban Chestnut's fourth brewery is located in the Hallertau region of southern Germany, near our Brewmaster's home town.